Perhaps the most colorful of warblers, the Chestnut-Sided Warbler is a sight to behold, and I had the opportunity to finally see one with a small group of birders in early July 2018 on the Powerline Trail at Grouse Mountain in West Vancouver. The object of our expedition played coy with the cameras for a good 30 minutes, only often giving periodic glimpses of his tail while singing clearly and often (a delightfully upbeat melody that has been likened to “pleased, please, pleased to meetcha”; I heard this song well before I saw him, and one particularly helpful birder told me that that was indeed the bird we were after). He was on the hunt for a mate — but none were to be found, for this migratory bird is a creature of the Mideastern Canada and U.S., and the North American East Coast during the spring and summer; and a rarity on the West Coast. Whatever brought him two provinces westward for a weeklong vacation is a mystery for which I am very grateful.

“Chestnut-sided” seems inadequate to describing this forest-dwelling insectivore. During breeding season, the males sport a dazzling arrangement of colors: bright yellow caps, rich reddish-brown hues streaking the sides, black eyestripes, and black wings on a crisp white breast and belly. These gentlemen know how to dress to the nines! To learn more about the Chestnut-Sided Warbler or hear its beautiful song, please visit its Cornell Lab of Ornithology allaboutbirds.org profile. 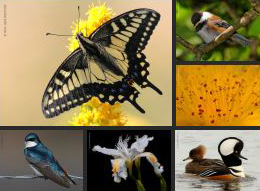