This gallery contains 5 photos. Buffleheads, also known as spirit ducks, are some of the most popular and strikingly-colored ducks to grace Metro Vancouver shores during winter. Their main claims to fame are their small size and (in the case of the adult males), fascinating plumage colors.

These diminutive–one might even call them dainty–migratory ducks aren’t often found in large flocks like Northern Pintails, Mallards, or American Wigeons tend to be; we usually see 3-4 at most in a pond, marsh, or sea. They also don’t court human attention, keeping a minimum personal space of 30-50 feet. They are quite pacific, and seeing any battling with other ducks or even each other is rare.

All of these conventional behaviors was broken on an early, cold, and sunny December 4, 2016, when we discovered 30 Bufflehead ducks making themselves very much at home on a man-made West Vancouver pond in Ambleside Park. They weren’t swimming as one big flock (Buffleheads rarely do), but as smaller groups of 4-10. Most were extremely well-behaved, but two adult males decided to break the harmony of Swan Lake (Ambleside Park is also home to a resident pair of breeding Mute Swans) by having a brief round of squabbling. 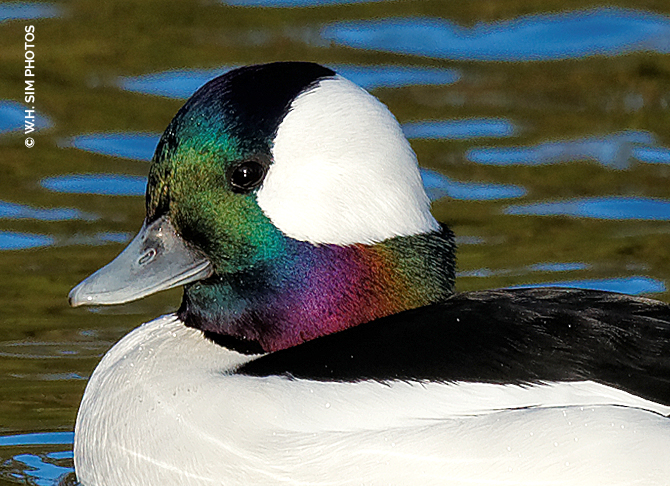 The adult males sport contrasting breeding plumages of black and immaculate white (making them look like swimming pandas), but when the light catches those shiny black heads just right, they shine just rainbows. It’s an example of stunning showmanship that they can turn on and off on the fly. This is the moment when I try to take the shot, because the catchlights also become more evident in their eyes.

The females aren’t as flamboyantly dressed, but even without high contrast or iridescent feathers, they look cute, thanks to the fact that they look like half-grown ducklings. Both genders can fluff/ruffle the feathers of their heads to make them look like big-headed toddlers–I’m surprised that plush Bufflehead ducks aren’t flying off the shelves at Christmas. 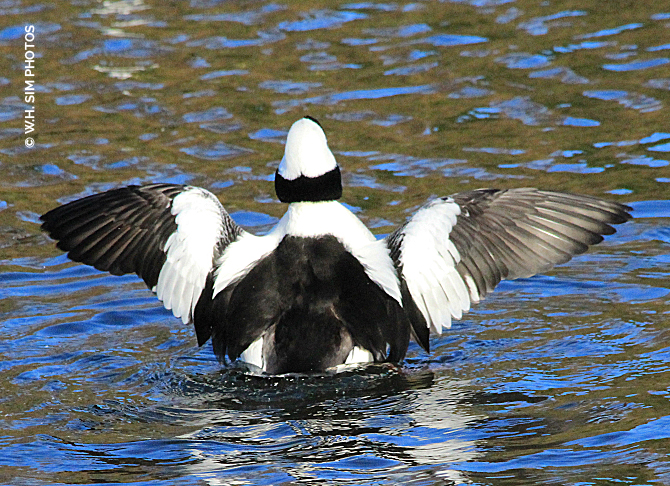 In the wintertime, the diets of these insectivores also include aquatic vegetation and molluscs, but they will also feed on birdseed. We have never seen any ducklings in Metro Vancouver, because Buffleheads breed quite far north across many parts of North America during spring and summer (nesting in large woodpecker holes!), and return to the Lower Mainland in the fall and winter. Learn more about Buffleheads by visiting their Cornell Lab of Ornithology allaboutbirds.org profile.